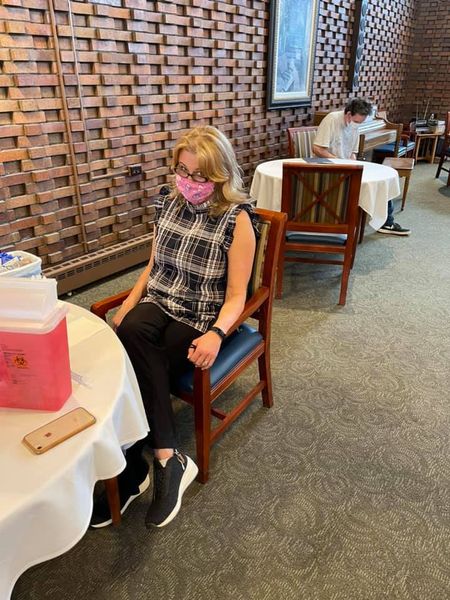 After months of waiting for my COVID-19 vaccination, I just returned from getting my second shot.
On Good Friday, appropriately enough.

Although this quick prick followed by slight soreness in the arm is insignificant suffering compared to what so many others have gone through as we slowly make our way to our new post-COVID life, getting that final shot did bring a sense of relief. And gratitude.
Had it not been for Plum Landing Executive Director Don Mangers calling me unexpectedly a few weeks ago, my old senior body would still be waiting to even schedule my vaccines.
Turned out the retirement facility, which I had visited when residents were getting their shots, had a few extra doses on this catch-up inoculation day that would go to waste if not used.

And Mangers was desperately calling around trying to find eligible people who could make it to the facility in time to take the shot.

So yes, I’m extremely grateful to Plum Landing folks, as is my husband, who like me had not yet been given the green light by his own health care provider to schedule an appointment.
Now fully inoculated, I wonder just how frustrated and annoyed I’d be if I was among the 30% of Illinoisans over 65 who were not vaccinated.
Especially as the governor opens up more eligibility throughout the state.
Especially as more and more younger residents without underlying conditions have somehow managed to get both shots while so many of their elders sit around and wait.

How I received the vaccine, getting a call from someone with an extra dose on hand, is not unusual. I know at least a dozen others who have managed to get inoculated with an unexpected call that comes asking if you can be at a certain vaccination site in less than an hour, or from someone flagging them down inside a pharmacy while shopping for toothpaste and shampoo.
I’d like to think I would still be patient.
Still be happy for those receiving it.
Even if they are younger and fitter than me.
Even if they are boasting about it online.

Even if they fibbed just a bit – or more than a bit – to get the shot ahead of others.
People who have long been eligible are still desperately trying to get vaccinated, noted VNA registered nurse Susan Teffeteller, who put that second Moderna-filled needle into my arm on Friday morning.
Teffeteller has been giving vaccinations for the past three weeks at VNA Health Care on Highland Avenue in Aurora – and off-site, as well – so has seen the relief in eyes and in voices after she’s puts those vaccines into arms.
One woman, she said, cried when she got the shot, not because it was painful but because she’d lost a parent, as well as an uncle and aunt, to COVID-19. And her sense of relief simply overwhelmed her.
I have to say, I too felt relief, certainly less vulnerable when that second needle pierced my skin. But an unexpected surge of melancholy also washed over me and it took a moment for me to realize why.

Thousands of people in Kane and surrounding counties have succumbed to this virus which plays by rules we’ve never seen before and have yet to totally figure out. They died because, well, that’s just how fate works. And for reasons none of us will ever understand, they did not get to live to benefit from these life-altering and life-saving vaccines.
People like my godmother, who will not be at the next family reunion in Kansas.
Or my friend Kathy, whose seat at our holiday table was empty this year and will forever be.
Or my friend Tom, whose wife and three children are not only dealing with unimaginable grief but a whole lot of anger.
I try not to judge those who see no need for the vaccine, either because they don’t believe COVID-19 is a threat to their health or because they fear the side effects more than the virus. And I know there are those plenty on the fence about getting a shot, who I hope will at some point in the near future fall on the side of safety and science and the good of our whole community.

What has been particularly frustrating, Teffeteller told me after my shot had been administered, are those who register for the vaccine and then, for whatever reason, fail to keep their appointments.
For example, a thousand people signed up to get inoculated on Wednesday at the mass vaccination at Fox Valley Mall, she said. But there were 100 no-shows.
Which means 100 people who are still desperately trying to get their first shot were denied that opportunity.
Which means these health care providers not only had to vaccinate the people who did keep their appointments, but also had to go out into the mall and hunt down 100 replacements so those precious vaccines did not go to waste.
“We did it. We found the people,” Teffeteller said. “But please tell your readers that it doesn’t take much effort to cancel if you make an appointment and then can’t make it.”
When they decide just not to show up, she continued, it’s taking shots out of the arms of those who are waiting – patiently or anxiously – to get vaccinated. And it’s making more work for those who are administering the shots.
I hope those shoppers at the mall on Wednesday who received that unexpected gift were as grateful as I was when I got that call in March from Plum Landing.
All the health care experts I’ve spoken to over the past month have told me, with no equivocation, we are not out of the woods yet. I trust them because they don’t just read the statistics, they see the faces behind the cases.
In case you’ve not been paying attention, those COVID numbers are ticking upward. Things are opening up and people are getting out more. Which means guards are being dropped, along with face masks. Plus, there’s at least one, perhaps more, contagious variants on the edges of our lives that we don’t want creeping any closer.
And yes, there are still people suffering from COVID-19 – people still dying.
That’s why I’m feeling lots of emotions today, but mostly gratitude that my chances of meeting a similar fate just got a whole lot lower.
dcrosby@tribpub.com